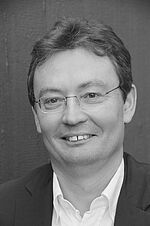 Director of the Institute of Neuropathology

The research group of G. Reifenberger is primarily interested in the identification and characterisation of genetic and epigenetic aberrations in primary brain tumors, in particular gliomas, meningiomas and medulloblastomas.

Molecular genetic analyses, including genome-wide profiling approaches at the genomic and transcriptomic levels are performed on primary human tumor tissues as well as cell lines and experimental mouse models. A particular focus is placed on the role of non-coding RNA and epigenetic alterations, including changes in DNA methylation and histone modifications in brain tumor pathogenesis. Moreover, the group is very much interested in the translation of novel laboratory findings into the molecular diagnostics of brain tumors and has contributed to the revised WHO classification of tumors of the central nervous system 2016.