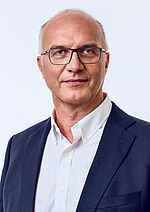 Holger Stark is pharmacist by education and made his PhD in Medicinal Chemistry under the supervision of Prof. W. Schunack at the Free University of Berlin, Germany, in 1991 on newly designed prodrugs (BF2.94). During his habilitation at the same university he worked on neurotransmitter ligands, mainly at dopamine and histamine receptor subtypes for the central nervous system. In 2000 he became full professor at the Goethe University in Frankfurt, Germany and went in 2013 to the Heinrich-Heine-University in Düsseldorf, Germany where he has his actual position.

He is founded some start-up companies on cancer therapeutics (Warburg Glycomed, PSites Pharma) and has received several prices for his successful research as well as for teaching. He received in 2016 a honorate docorate from the University of Nis, Serbia. On more than 370 book contributions, original papers, reviews and patents he has focused on neurotransmitter as well as on lipid signaling research. The developments of novel pharmacological tools for imaging and of ligands with designed selectivity are some of the highlights. He is co-inventor of pitolisant (Wakix®), the first histamine H3 receptor antagonist with market approval and has prepared some back-up (pre)clinical candidates in different leads for various targets. From 2004 - 2019 Holger Stark was editor-in-chief of the Archiv der Pharmazie – Chemistry in Life Sciences, one of the oldest journals on Medicinal Chemistry.