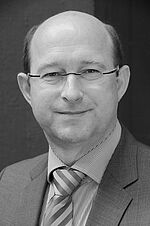 Director of the Institute of Medical Microbiology and Hospital Hygiene

Our group is interested in the identification and characterization of antimicrobial effector systems involved in the control and the elimination of intracellular pathogens, such as Listeria monocytogenes, Mycobacteria and Toxoplasma gondii. Hereby we are mainly interested in mechanisms triggered by classical proinflammatory cytokines, like IFNβ, IFNγ, TNF or LT-β. We have identified a large family of IFN induced GTPases, called mGBPs, highly induced after infection in vivo and under proinflammatory conditions in vitro. Our data clearly support the hypothesis that several mGBPs directly interfere with intracellular T. gondii, leading to a reduced viability of the pathogen within the cell. Our current goals focus on the characterization of the molecular determinants leading to an antimicrobial action of mGBPs in several infection models with different pathogens. Hereby, we apply molecular methods to characterize single mGBP function and expression using confocal microscopy, infection assays and expression studies. The generation of mGBP deficient mouse lines allows us to study the in vivo role of mGBPs in systemic infections.

In fruitful collaborations we address the functions of members of the TNF receptor superfamily in EAE and neuronal regeneration and degeneration.

A further research focus includes the characterization of Jak2 mutant mice and the effect of the Jak2 kinase activity on the establishment of an innate immune response. For this purpose we generated a Jak2 mouse line with defective kinase activity as well as a Jak2 deficient line.

In a third avenue of research we are interested in the role of TNFR and LTbR in liver regeneration after partial hepatectomy as well as in acute infection with Listeria monocytogenes.