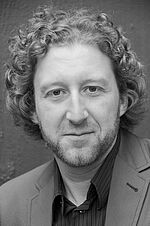 Our laboratory is primarily interested in the molecular neuropathology of Alzheimer’s disease (AD). The initial trigger in the pathogenesis of AD is the accumulation and aggregation of amyloid-β (Aβ) peptides in the aging brain. These Aβ peptides including the highly aggregation-prone and pathogenic Aβ42 peptides are generated through sequential cleavage of the amyloid precursor protein (APP) by the proteases β- and γ-secretase. We have discovered a new class of small molecules called γ-secretase modulators (GSMs) that selectively lower Aβ42 production but do not affect the overall enzyme activity of γ-secretase. While classical inhibitors of β- and γ-secretase have caused severe side-effects in AD clinical trials, GSMs remain in clinical development and a promising and potentially cost-effective option for the prevention of AD. Ongoing efforts in our laboratory concentrate on a full understanding of the molecular mechanism of GSMs, and the chemical development and preclinical testing of improved GSMs.

We are further interested in novel cellular pathways controlling Aβ production and APP processing. Recently, we discovered that APP is cleaved at multiple sites by the secreted metalloprotease ADAMTS4 (a disintegrin and metalloproteinase with thrombospondin motifs 4) resulting in the generation of N-terminally truncated Aβ4-x peptides. Aβ4-x peptides are particularly toxic to neurons and highly abundant in brain tissue of AD patients. ADAMTS proteases have been identified as genetic risk factors for sporadic AD, and we are pursuing their role in AD pathogenesis using a variety of murine and human in vitro and in vivo models.

Other interests of our research group include the mechanism of PSEN mutations in familial AD, the role of inflammation and microglia cells in the disease, and the pathophysiological role of the growth factor progranulin in frontotemporal dementia. The group uses techniques of cellular and molecular biology and protein biochemistry, including gene editing, stem cell cultivation and differentiation, and the use of murine animal models. Synthetic chemistry and chemical biology experiments are performed in collaboration with medicinal chemists.