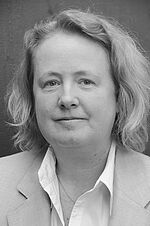 Alzheimer's, Parkinson's and a family of poly-glutamine(Q) expansion diseases are defined by amyloid-like protein fibrillation and neurodegeneration. We are particularly interested in the interactions between the fibrillogenesis of endogenous polyQ-proteins in the cell nucleus and gene expression. As formation of poly-Q-containing amyloid is preceded by a series of protein fibrillation steps, these steps are characterized in correlation to nuclear function and respective genetic modifiers. Our research is based upon the idea that comprehension of the physiological role of polyQ repeats is a prerequisite to uncover the underlying mechanisms of aberrant protein fibrillation and neurodegenerative aggregation diseases.

We have shown in cell culture systems that xenobiotics such as nanoparticles and heavy metals alter the protein homeostasis in the cell nucleus and induce aberrant fibrillation of proteins to amyloid-like intranuclear inclusions. These inclusions contain components of the ubiquitin-proteasome system (UPS) and represent active proteolytic centers. We currently investigate which nuclear proteins are degraded within such proteolytic centers and the consequences for gene expression. Since xenobiotic-induced nuclear inclusions exactly mimic those observed in polyQ-expansion diseases, our research contributes to elucidate the role of protein fibrillation in neurodegeneration and neurodegenerative disease.

Identifying nanomaterial-bio-interactions is imperative due to the broad introduction of nanoparticle applications and their distribution. We investigate widespread protein aggregation in the soil nematode C. elegans ranging from induction of amyloid in nucleoli of intestinal cells to facilitation of protein aggregation in body wall muscles and axons of neural cells. Proteomic screening identifies segregation of proteins belonging to the gene ontology group of "protein folding, proteolysis and stress response" in an SDS-resistant aggregome network. Network proteins include chaperones, heat shock proteins and subunits of the 26S proteasome which are all decisively involved in protein homeostasis. The analysis of a reporter worm for serotonergic neural cells reveals xenobiotic-induced protein aggregation in axons of HSN neurons, where presynaptic accumulation of serotonin, e.g. disturbed axonal transport reduces the capacity for neurotransmission and neural behavior. In C. elegans certain noxae promote a cascade of events including disturbance of protein homeostasis, widespread protein aggregation and inhibition of serotonergic neurotransmission which can be interrupted by anti-amyloid fibrillation compounds.