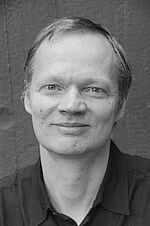 We are interested in the formation and remodeling of synaptic connections. Once formed, synapses are not static but are reorganized throughout life. The reorganization of synapses is generally accompanied by changes in electrical activity, occurring e.g. during learning and memory processes or postembryonic growth programs. Which molecules regulate these activity-induced structural changes? We use the Drosophila neuromuscular junction (NMJ) as a model system to identify conserved regulators of synaptic remodeling, as it shares important chemical and structural features with excitatory synapses in the vertebrate brain. In large-scale mutagenesis screens we isolate mutations that interfere with the adaptation of the size of NMJs, i.e. the number of release sites, to the contractile strength of muscles.

Mutations inhibiting synaptic adhesion proteins or the synaptic cytoskeleton interfere with the assembly and organization of NMJs in Drosophila. Currently, we are studying the transsynaptic Neurexin/Neuroligin complex. Neurexins and Neuroligins interact across the synaptic cleft and organize a synaptic scaffold that precisely aligns presynaptic transmitter release sites and postsynaptic receptor fields.

In another project, we are examining the functions of the Ankyrin/Spectrin-based synaptic cytoskeleton. During muscle contractions, NMJs are exposed to tremendous mechanical strain. NMJs lacking functional support of the synaptic cytoskeleton can no longer be stabilized and degenerate over time. Since these proteins are highly conserved in vertebrates we hope that our results will also shed some light on the mechanisms of neurodegenerative diseases in humans.